For over 175 years First Christian Church has been a worshiping, caring, Christ-centered congregation in Bloomington, Illinois. From its humble 1837 beginnings in the home of pioneer founder, William T. Major, this church now overflows a city block on Bloomington’s near west side. Strong, effective Christian leadership and a genuine practice of hospitality by its members provide creative traditional and modern worship experiences, religious education for all ages, fellowship and mission opportunities. These programs and activities are designed to enhance spiritual growth and foster a sense of commitment to be loving witnesses to God’s presence and faithfulness in this community. Our faithful past has led us to a mission-centered and engaging present, and points the way to a glorious future. 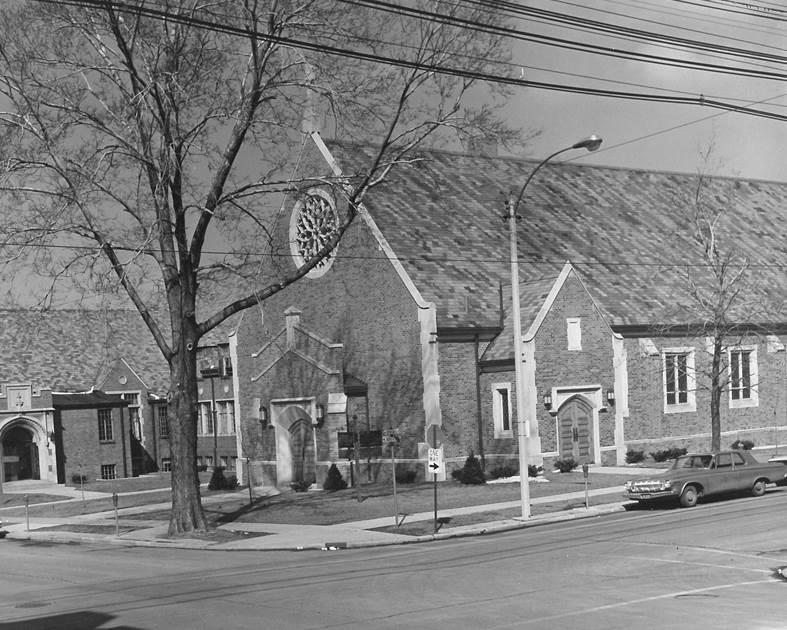 — Thank you to Dorothy Sallee for providing these facts

The Christian Church (Disciples of Christ) grew out of two movements seeking Christian unity that sprang up almost simultaneously in western Pennsylvania and Kentucky – movements that were backlashes against the rigid denominationalism of the early 1800s.

Thomas and Alexander Campbell, a Presbyterian Scotch-Irish immigrant father and son in Pennsylvania, rebelled against the dogmatic sectarianism that kept members of different denominations – and even factions within the same denomination – from partaking of the Lord’s Supper together. Walter Scott, an immigrant from Scotland, was a successful evangelist of the resulting Campbell movement as it separated from the Baptists.

Barton W. Stone, a fifth-generation American in Kentucky and also a Presbyterian, objected to the use of creeds as tests of “fellowship” within the church, which were a cause of disunity, especially at the Lord’s table. He was a key participant in the Restoration Movement following the Cane Ridge Revival of 1801 near Paris, KY.

“Christians,” the name adopted by Stone’s movement, represented what he felt to be a shedding of denominational labels in favor of a scriptural and inclusive term. Campbell had similar reasons for settling on “Disciples of Christ” but he felt the term “Disciples” less presumptuous than “Christians.” (For an introduction to some of their ideas, see the Last Will and Testament of the Springfield Presbytery – 1804 or the Declaration and Address – 1809.)

The aims and practices of the two groups were similar, and the Campbell and Stone movements united in 1832 in Lexington, KY after about a quarter of a century of separate development. (For key dates and more detail, go to the Disciples of Christ Historical Society website.)

A Heritage of Openness and Ecumenism
The Disciples have a long heritage of openness to other Christian traditions having come into existence as a 19th century protest movement against denominational exclusiveness. At the local level and beyond, Disciples are frequently involved in cooperative and ecumenical work.

In 1910, the Disciples established the Council on Christian Unity, the first denomination in the world to have an organization devoted to the pursuit of Christian unity.  Disciples helped organize the National and World Councils of Churches.  General Minister and President Sharon Watkins is a member of the WCC governing body and also an officer on the NCC board (2013).

Disciples have given leadership to the establishment of Christian Churches Together in the U.S.A. (CCT) that brings together Catholics, Protestants, Orthodox, Evangelicals and Pentecostal Christians to seek to make a common witness in the United States. The Rev. Richard L. Hamm, former General Minister and President, was CCT’s first full-time executive.

In 1989, the Disciples and the United Church of Christ declared that “a relationship of full communion now exists between our two churches.” The ecumenical partnership rests on five pillars of acceptance and cooperation: a common confession of Christ; mutual recognition of members; common celebration of the Lord’s Supper/Holy Communion; mutual recognition and reconciliation of ordained ministries; and common commitment to mission.

Joint work between the Disciples’ Division of Overseas Ministries and the UCC’s Wider Church Ministries (formerly known as United Church Board for World Ministries), dates from 1967. World mission for both churches is now carried out by the Common Global Ministries Board, established in 1995.

In 2013, Disciples Home Missions and the UCC began to develop common programs in the areas of Children and Family Ministries and youth and young adult ministry. In addition, key executives of both denominations took the necessary training to have mutual ministerial standing in both denominations.

In the wider ecumenical movement, Disciples have held theological conversations with the Roman Catholic Church and with the World Communion of Reformed Churches.